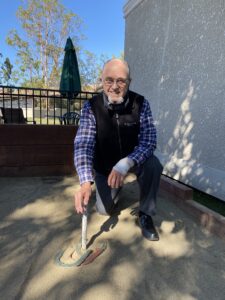 By most accounts, the game of horseshoes is not as popular as in decades past, but you wouldn’t know it when you see the 17 hardcore horseshoers in the league at Morningside of Fullerton retirement community.

Art Black is the reigning ringer for pitching the 2.5-pound horseshoe at the opposing stake 30-feet away on the manicured turf courts at Morningside.

“Every little bit affects the game – moving your hold just a half inch on the shoe can make a big difference,” Black said. “You don’t throw a shoe; you use a strong back throw and fluid arm swing like a pendulum.”

Today, regulation courts are 50 feet long, 10 feet wide and contain two pitcher’s boxes, both six feet square, with a stake in the middle. The Morningside ringers even have calipers on standby to get down and measure whose shoe is closer to the pin, sometimes using a sheet of paper for differences down to a millimeter.

“It’s a good, healthy outdoor sport to participate in,” said Black who also notes the social benefits of the game and camaraderie it evokes. “Our league holds matches five mornings a week at Morningside, and it’s social and competitive.”

Read more about the Morningside Horseshoe Ringers in this story published in the Orange County Patch.