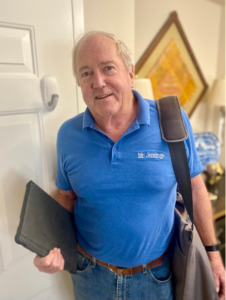 Most adults would need to knock off some rust to remember the complexities of high school math classes. For Morningside of Fullerton resident Steve Jennings, he welcomes the challenge with open arms.

Two to four mornings a week, Steve Jennings gets up early at his apartment home and makes the 17-mile trek to Legacy Magnet Academy in Tustin to serve as a volunteer math teacher. He’s served in math classrooms for more than five years now.

“I wanted to contribute and do good for others,” Steve says.

With a Stanford engineering degree and a Harvard MBA, Steve has always loved numbers. He says he’s glad to work with them more directly now than he did during his career as a petroleum industry executive.

Most importantly, he says it’s stimulating to be in the classroom, rewarding to help kids out and is proud to see them achieve.

Between lessons in linear inequalities, solving simultaneous equations and helping students develop financial statements for a business plan, he’s earned a volunteer of the year award in the school district. Both Steve and his wife have been involved in Tustin schools for years and are recognized patrons.

When Steve took a brief classroom break earlier this year when Omicron cases flared up, he said students’ reaction upon his return almost brought him to tears.

“I brought my grandkids over to see the school and it really touched me to see the students want me back,” he comments. “It’s fun to be appreciated.”

Steve says living at Morningside of Fullerton allows him to focus more on meaningful endeavors and stay connected to the greater community. It’s probably no surprise he serves as Treasurer of the Resident Council at the retirement community, a role involving significant work with numbers and budgets.

With April as National Volunteer Month, there’s no better time to explore opportunities to give back. If you’d like to explore the lifestyle at Morningside of Fullerton and perhaps meet Steve and other residents, click to learn more.

You can also see the story featured in the Orange County Patch.