Published in the Orange County Patch
Written by: GlynnDevins, Community Contributor
Published on: February 12, 2021, at 8:52 am 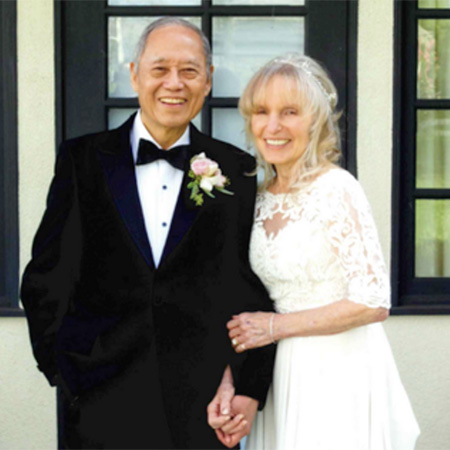 Wo Kwok wasn’t looking for love back in 2016, but little did he know he would be struck by cupid’s arrow when he met Olga. This year, on Valentine’s Day, the two 80-somethings will celebrate three years of wedded bliss.

Wo and Olga met at Morningside of Fullerton retirement community, which they both call home. Their relationship started as a friendship, which turned into dates at their favorite restaurants and opera orchestra concerts. Just months after meeting one another, Wo proposed. They were married 14 months later on Valentine’s Day 2018.

The two will celebrate their third wedding anniversary where they tied the knot — Summit House Restaurant. Through the pandemic, Wo and Olga have kept each other’s spirits high. Whether it’s going on walks or having breakfast dates, their love has persevered.

Research has consistently shown the benefits of marriage at any age. According to studies, people who are married are more likely to live longer, be happier, be mentally and physically healthier, and recover from illness quicker than their unmarried counterparts.

This is the second marriage for both Wo and Olga after losing their spouses. The two have been the talk of Morningside and credit their connection to providence. They say they’re excited to continue their happiness together.