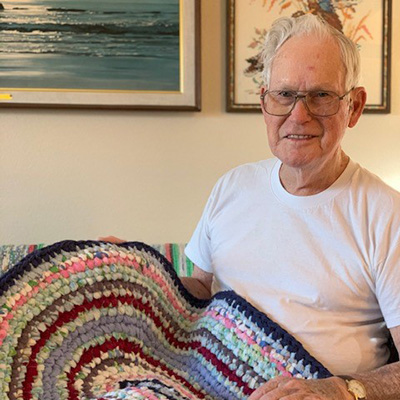 Sylvanus Twete, who goes by S.O., has been a crochetier for nearly three decades. Now in his 80s, he’s turned his passion into a way of giving back. S.O. spends his time cutting scrap fabric and turning it into beautiful handmade rugs. Over the past 25 years, he’s created and donated 330 rugs to his friends, family, team members, and his neighbors at Morningside. The community has dubbed him the “Morningside Crafter.”

S.O. was born and raised on a farm in North Dakota. During the long winters as a child, he noticed his dad would crotchet to pass the time. S.O.’s love for crocheting began when his wife was throwing out old square dancing dresses.

“I asked my wife if I could have the dresses to see if I could stitch up something like my pa used to do,” said S.O. “I cut them up, put it all together, and showed it to her. She looked at it, looked up at me, and said, ‘Want me to tell you what you did wrong?’ My wife crocheted, and she pointed out all the flaws in my first rug, but she helped me along the way, and I haven’t stopped since.”

S.O. frequents the local thrift shops to get his hands on fabric to make his rugs. One rug requires about 12 yards of fabric. Depending on the size of the rug, it takes him up to two days to complete.

Morningside of Fullerton knows the importance of residents staying active at the community. In fact, one study found that seniors who participate in activities like crocheting were 45% less likely to develop mental impairment later in life. Specifically, some have even labeled crocheting a “whole-brain activity” due to its mix of problem-solving and creativity.

Just this year, S.O. has completed 30 rugs and is currently working on another one, just in time for the holidays.

Read more about S.O. and his love for creating rugs in the Orange County Patch.